Successful Start To The New Fiscal Year For Volkswagen

Stone Avenue Standard Becomes The First Off-Campus Student Housing Property At The University Of Arizona To Offer Its Residents Electric Vehicle Charging In A...

The Beginning, Rise & Fall of EVs: An electric vehicle (EV) is a vehicle that is driven by onboard stored electricity. EVs include, but are not limited to, road and rail vehicles, surface and underwater vessels, electric aircraft, and electric spacecraft but in common terminology, EV is used for Automobiles.

These EVs have a long history, starting from 1834 & ruled the mobility world because they were better and also had many other advantages over their early 1900s ICEV counterparts including higher NVHS (noise, vibration, harshness & smell) levels associated with ICEV vehicles. They had fewer rotary parts & did not require a hand crank to start and also did not require gar changing during the drive. Presumably the first EV was made in 1891 (a six-passenger wagon made by William Morrison) & by 1895 more engineers began to devote their attention to EVs. Many innovations followed as the interest in EVs increased greatly in the late 1890s to early 1900s. In addition, electric mobility grew in other areas like trains & trams.

However, the fall of EVs came much quicker than expected between 1990 to 1930 when many prevailing factors favored the growth of ICEVs. These factors promoted & sustained exponential growth of ICEVs as during this period oil prices kept on falling & the market of ICEVs kept on growing. The technology & infrastructure needed for EVs could not match this pace of development but in my view, it was Henry Ford who pulled the plugs of EVs by his doggedness & focused approach in creating an affordable ICEV for the masses. Technological innovation like electric starter (Charles Kettering, 1912) increased the acceptability of ICEVs & multiple players forayed into ICEV manufacturing. During this time while the market of ICEVs grew rapidly, the prices of ICEVs kept on falling. By contrast, the price of the EVs continued to rise and by the end of 1912, when Model T was selling between the price range of $500~$1000, an EV was costing $1750. By 1936 EVs disappeared from the market.

However because of their inherent much better qualities and features, the EVs never lost their charm and hence most of the global companies kept on developing alternatives technologies for reviving EVs and hence technologies like BEVs, HEVs, PHEVs & FCEVs evolved in the next few decades and have been summarized below: 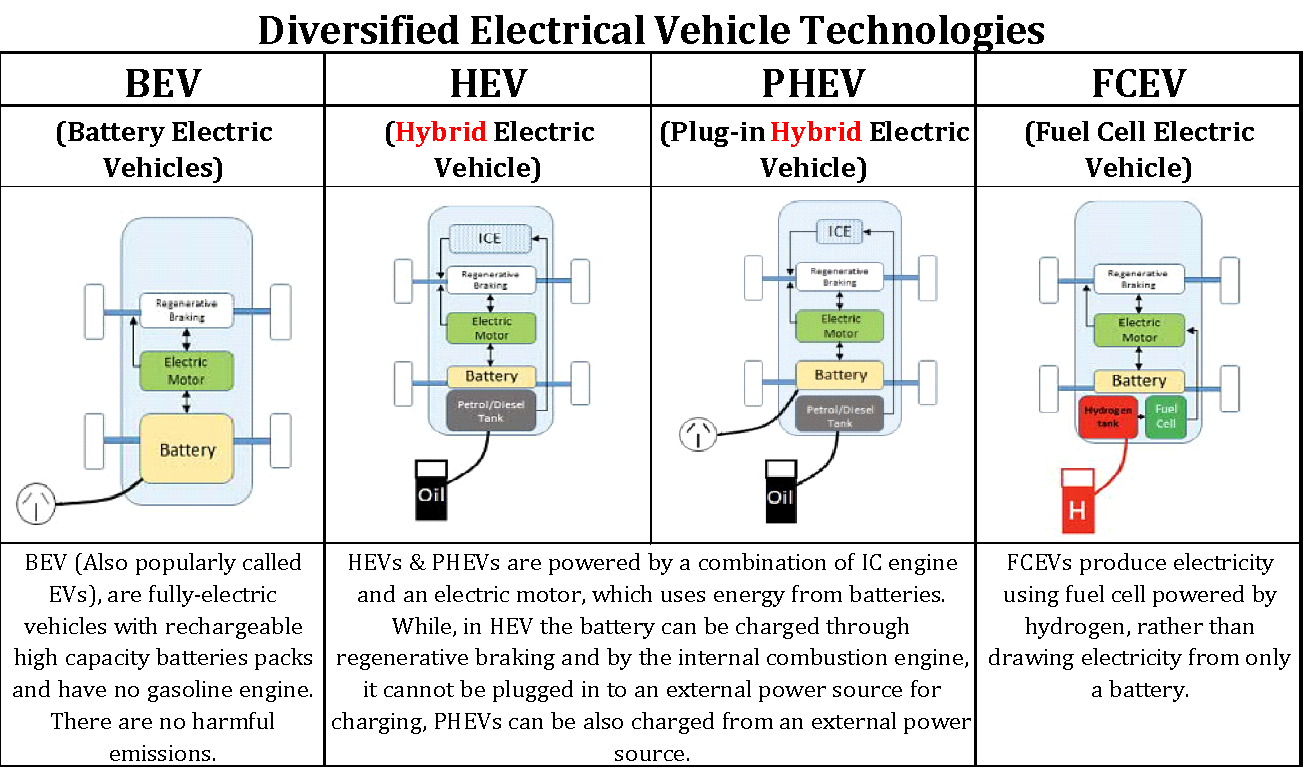 It was only a matter of the right time when EVs could bounce back.

Rise from Ashes: The revival of EVs could be attributed to few unrelated incidents which happened between 1940~1980 e.g. invention of the transistor (1947), the invention of MOSFET (1959), the Gulf Oil Crisis (1970) & development of lithium-ion battery (1980). With the continual advancement in the solid state electronics, controller, and drives as well as in battery technology, etc. as well as the fall in their prices, interest started again rising in EV involving all existing ICEV manufactures as well as many new entrants. Tesla, Like Henry Ford, has been a pioneer in single-handedly taking this mission forward and invested heavily in its GigaFactory between 2003~2005 to produce EVs. In 2008, it developed the cutting-edge battery technology and electric powertrain need for EVs. From there, Tesla designed the world’s first-ever premium all-electric sedan from the ground up-Model S-which became the best car in its class, combining safety, performance, and efficiency.

With the recent increase in acceptability, durability, and reliability of EVs and the rise of internet/ IoTs in the last few decades, which are becoming part of automobiles more so for EVs, Connected and Autonomous Electric Vehicles (CAEVs) are the natural successors of EVs. These future CAEVs can provide a well-controlled & coordinated transportation system in the smart city of the future. While they will be self-governed, self-driven, self-controlled, self-corrected, they will also require the least human interference as far as mobility issues are concerned. While on move, these CAEVs could access a wide range of networked data from the cloud to become more proactive, well-informed, and coordinated. When connected to the highly complex real-time data network of the future, these CAEVs would be able to “talk” with each other, their surroundings becoming an integral part of the consciousness of smart mobility network comprising of smart devices, smart roads, smart signals, smart parking as well as real-time local terrain and geographical information, weather conditions and live traffic data. With the output of this data coupled with their own computation capacities, these CAEVs will be able autonomously to work out the best, most comfortable & safest possible mobility solution for humans traveling in them without their intervention.

The growth in smart cities will provide tremendous growth opportunities where these CAEV can provide smart mobility solutions by forming interconnected vehicular networks assessing & analyzing diversified live information. In Society 5.0 (as it is called) CAEVs will be playing a dynamic role by interacting & interfacing with humans providing them all mobility solutions. There will be many expected & many more unforeseen potential benefits & challenges both to users in Society 5.0 as well as to CAEVs themselves.

CAEVs are a certainty and it is only a matter of time when they become a part of human lives. CAEVs are projected to be the next gold standard of mobility, transforming the automotive industry, city development, and the whole gamut of social infrastructure that we see today. The rise of EVs is certainly the right step towards a better tomorrow as conventional ICEVs despite their current level of sophistication can possibly not provide the kind of intelligent interface a future automobile would need in a networked world. This would be an interesting transformation phase for both the automotive industry as well as the whole society we live in.

Future Outlook For Indian Electric Vehicle Supply Chain: How Does It Look Like?

This site uses Akismet to reduce spam. Learn how your comment data is processed.